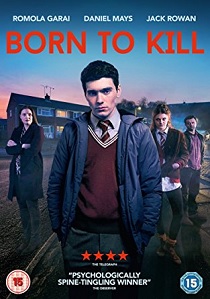 Born To Kill, released on DVD 12th June 2016 from BBC Worldwide, is an intense and powerful and haunting four-part drama exploring the mind of Sam (newcomer Jack Rowan), a teenager on the verge of acting out suppressed psychopathic desires.

Sam lives only with his protective mum Jenny (Romola Garai - The Hour, Suffragette), a geriatric nurse, and thinks his dad died in a car crash. However, Sam's dad is still alive. Sam's dad, a violent man named Peter (Richard Coyle - The Fall), is actually a convicted murderer, nearing his parole date.

While working at the local hospital, Jenny meets the charming Bill (Daniel Mays - Made in Dagenham, Line of Duty, Rogue One: A Star Wars Story). New to town with his moody teenage daughter Chrissy (rising star Lara Peake), Bill's trying to reconnect with his elderly mother Margaret (Elizabeth Counsell - Song For Marion). Just as Jenny and Bill start to hit it off, Sam meets Chrissy and falls in love for the first-time, feeling like he has finally meet somebody he can connect with.

As the menacing drama unfolds, Jenny, Sam and Peter's long buried past comes back to haunt their fractured families as decades of deceit are revealed. Jenny comes to fear that, despite her best efforts, Sam and his dad might be more alike than she could have ever imagined.

DVD
Starring Chris Evans, Snowpiercer, the post-apocalyptic ice age thriller set on a train that travels around the globe, is released on DVD and Blu-ray 25th May 2020 from Lionsgate Home Entertainment. END_OF_DOCUMENT_TOKEN_TO_BE_REPLACED
Hot PicksView