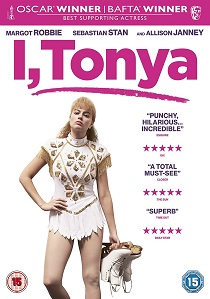 Nominated for three Academy Awards® (Best Actress, Best Supporting Actress and Best Film Editing), I, Tonya, released Blu-ray and DVD 25th June 2018 from Entertainment One, is a darkly funny and entertaining examination of Tonya Harding, the most controversial figure in the history of figure skating, and the headline-grabbing scandal that mesmerised a nation.

Packed with more than 40 minutes of exclusive bonus content, the Digital, Blu-ray, and DVD showcase deleted scenes and in-depth featurettes taking viewers behind the scenes of the film and its captivating story.

Spanning from Harding's earliest days at the ice rink to the notorious "incident," critics call I, Tonya "a hilariously tragic story of success so entertaining you can't look away" (Eric Kohn, Indiewire). Presenting multiple, and at times contradictory, perspectives of the events, the film explores the ways public opinion can be permanently shaped by news agendas and tabloid culture. But beyond the headlines, I, Tonya tells a complex story of resilience and perseverance, as a rebellious working-class girl pursues her dream competing in a "ladylike" sport, only to be caught up in controversy and criminal circumstances created by her involvement with those closest to her.

Based on the incredible true events, I, Tonya is a darkly comedic tale of American figure skater, Tonya Harding, and one of the most sensational scandals in sports history. Though Harding was the first American woman to complete a triple axel in competition, her legacy was forever defined by her association with the infamous attack on fellow Olympic competitor Nancy Kerrigan.

Featuring Oscar-nominated performances by actress/producer Margot Robbie (Suicide Squad) as the fiery Tonya Harding, and Allison Janney (Girl on a Train) as her acid-tongued mother (2018 Golden Globe® Award-winner), I, Tonya also stars Sebastian Stan (Captain America franchise) as Tonya's impetuous ex-husband, Bobby Cannavale (Boardwalk Empire) and Julianna Nicholson (August: Osage County), and is directed by Craig Gillespie (Lars and the Real Girl) from an original screenplay by Steven Rogers (P.S. I Love You). The film offers an often absurd, at times irreverent, and always piercing portrayal of Harding's life and career in all of its unchecked -- and checkered -- glory.