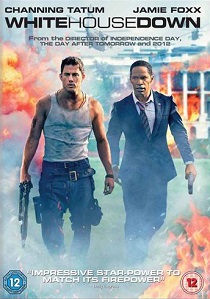 From Roland Emmerich, director of Independence Day, The Day After Tomorrow and 2012, comes the hard-hitting, non-stop thrill ride White House Down, available on Blu-ray and DVD with Ultraviolet on 20th January 2014, from Sony Pictures Home Entertainment.

The Blu-ray disc comes with over an hour of bonus features, including an exclusive gag reel, along with nine exclusive making-of featurettes, taking audiences behind the scenes to see what it took to bring the high-adrenaline adventure to the big screen. Both the Blu-ray and DVD come with four additional behind-the-scenes featurettes chronicling the on- and off-screen chemistry between the dynamic leading duo, training for and performing their own stunts, a look at Emmerich's vision for the film and how he was able to achieve it, along with a spotlight on the star-studded supporting cast.

Capitol Policeman John Cale (Tatum) has just been denied his dream job with the Secret Service of protecting President James Sawyer (Foxx). Not wanting to let down his little girl with the news, he takes her on a tour of the White House, when the complex is overtaken by a heavily armed paramilitary group. Now, with the nation's government falling into chaos and time running out, it's up to Cale to save the president, his daughter, and the country.

BD
With a mission of building from scratch an entirely new race car with the potential to defeat Ferrari at the 1966 Le Mans World Championship, att Damon and Christian Bale star in Le Mans '66,released ... END_OF_DOCUMENT_TOKEN_TO_BE_REPLACED
Hot PicksView