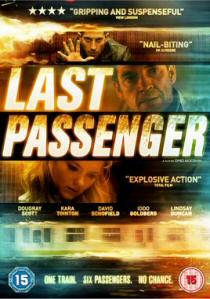 In Last Passenger, released on DVD and Blu-Ray on 26th January 2014, courtesy of Kaleidoscope Home Entertainment, Lewis (Dougray Scott; My Week With Marilyn, Mission: Impossible 2) jumps on the last train leaving London, heading home after a long day's work. Striking up a relationship with the flirty and beautiful Sarah (Kara Tointon; The Sweeney), soon he realises this is going to be a journey to remember, but for all the wrong reasons.

In the sleepy and abandoned carriages, stop after stop are missed and Lewis, with 5 other remaining passengers, end up on a ride of a lifetime as the train hurtles relentlessly down the track. Hijacked by a vengeful socio-path who is hell-bent on crashing the speeding train, all 6 strangers must work together if any of them are going to survive this death ride which is destined for destruction.