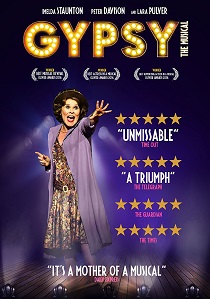 Following a string of five star reviews after its eight month run at the Savoy Theatre, don't miss the filmed production of Gypsy, one of the greatest ever stage shows to hit the West End.

Awarded with an Olivier Award® for her role as Momma Rose, Imelda Staunton (Maleficent, The Harry Potter Series) gives "the performance of her career" in Jonathan Kent's dazzling revival. Lara Pulver (Edge of Tomorrow, Spooks), reprises her "stunning" role as Louise and they are joined by Peter Davison (Law and Order: UK) as Herb, in this gloriously entertaining musical fable that features show stopping choreography from Stephen Mear.

Gypsy is based on memoirs of Gypsy Rose Lee, a famous striptease artist back in 1957, and focuses on her mother, Rose, whose name has become synonymous with "the ultimate show business mother". It follows the dreams and efforts of Rose to raise two daughters to perform onstage and casts an affectionate eye on the hardships of show business life.

Featuring the classic songs "Let Me Entertain You", "Rose's Turn" and "Everything's Coming Up Roses" with lyrics by Stephen Sondheim and music by Jule Styne, this moving and scintillating production of Gypsy was the first to be seen in London for 40 years.

Experience the magic of the West End when Gypsy comes to Digital Download and DVD on 28th November 2016.

Related Articles
Paddington 2, Finding Your Feet, Paddington 2, Pride, Maleficent, Much Ado about Nothing, Arthur Christmas, The Pirates! In An Adventure With Scientists, The Awakening, Cranford: The Specials, Three And Out, Harry Potter and the Order of the Phoenix, Freedom Writers, The Wind in the Willows, Chicken Run, Harry Potter and the Order of the Phoenix, Three and Out, The Wind in the Willows, A Confession, Downton Abbey: The Movie, Maleficent: Mistress of Evil, Flesh and Blood
Spooks: The Greater Good, Sherlock: Series 3, Fleming: The Man Who Would Be Bond, Skins - Series 7
Doctor Who: Frontios, Doctor Who: Earth Story, The Hitchhiker's Guide To The Galaxy: Special Edition, Vera: Series 9, Gentleman Jack
Comments
3D-BD Releases News Pick