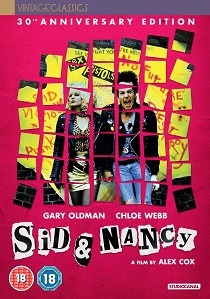 On 4th June 1976, The Sex Pistols performed a legendary gig at the Manchester Lesser Free Trade Hall that inspired a generation to reject the established principles of making popular music and performance marking the beginning of a seismic shift in youth culture.

To celebrate the 40th Anniversary of this event and the beginning of 'Punk', StudioCanal will be releasing the restored Sid and Nancy on a new special-edition DVD and Blu-ray released on 29th August 2016 on the Vintage Classics label from StudioCanal.

Arguably one of the most iconic figures of the Punk-era was Sid Vicious. He joined The Sex Pistols in 1977 (replacing Glenn Matlock as bass guitarist) and in his performances and personal life he embodied the hardcore punk-personality taking the vulgarity and nihilism inherent in the music to its ultimate extreme.

In 1986, Alex Cox (Repo Man, Fear & Loathing in Las Vegas) co-wrote and directed Sid and Nancy, a vivid and shocking portrait of the mutually destructive drug-and-sex filled relationship between Sid Vicious and his American girlfriend Nancy Spungen. The film embodied the noise and fury of Punk while at the same time revealing the intimate and heart-breaking relationship between two lost souls stuck in a situation that they couldn't handle.

It's 1977 and The Sex Pistols have taken the music world by storm with lead singer Johnny Rotten (Andrew Schofield) and bass guitarist Sid Vicious (Gary Oldman - Tinker, Tailor Soldier Spy, The Dark Knight) enjoying all the spoils that fame and money have to offer. Vicious embarks on a relationship with an American groupie - Nancy (Chloe Webb - Shameless) - who has come to London to pursue him but the couple's increasing drug use frays relationships with Johnny and the rest of the band.

With Nancy in tow, The Sex Pistols embark on a chaotic tour US tour which ends in disaster with the band breaking up. Vicious attempts to start a solo career, with Nancy as his manager, but by now both are dangerously addicted to heroin. The two continue in a downward, destructive spiral until, in October 1978 at the Chelsea Hotel in New York, Nancy is found stabbed with Sid lying prostrate at her side. Arrested and accused of murder, he dies of an overdose before his trial.

With an original soundtrack featuring punk and post-punk artists such as Joe Strummer (The Clash), and The Pogues, Sid and Nancy is one of the defining films of the punk era and is available to buy for the first time as a UK Blu-ray from 29th August 2016 (also on DVD). The 30th Anniversary Vintage Classics DVD/Blu-ray special edition of Sid and Nancy features the restored film with colour correction approved by cinematographer Roger Deakins (Hail Caesar, Sicario, No Country For Old Men, The Shawshank Redemption) and a host of new special features.

UHD
Following the global success of Godzilla and Kong: Skull Island comes the next chapter in the cinematic Monsterverse in Godzilla II: King of the Monsters, arriving on DVD, Blu-ray and 4K UHD 7th ... END_OF_DOCUMENT_TOKEN_TO_BE_REPLACED
Hot PicksView