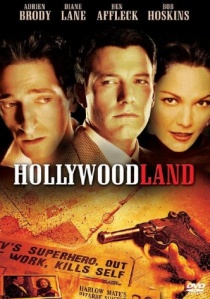 Hollywoodland, the compelling tale of the success and mysterious demise of Superman hero George Reeves, is out to own on DVD on 9th March 2007 from Buena Vista Home Entertainment. Hotly tipped for Oscar® nominations, Hollywoodland is packed with DVD extras that will sweep you further into the life of the original Man of Steel and Hollywood's glamorous golden era.

Based on the true story of Tinseltown's most notoriously unsolved mystery, Hollywoodland is the feature film debut from director Allen Coulter, the multi-award winning director of The Sopranos. The film stars a critically acclaimed cast of Academy Award® winners, Adrien Brody and Ben Affleck, and Academy Award® nominees, Diane Lane and Bob Hoskins. Bringing to life the cocktail hour glamour of the time, the film is set to continue dazzling the awards season. Highly praised for his role as Reeves, Ben Affleck received a Golden Globe® nomination for his supporting role, having previously picked up the best actor award at the Venice Film Festival, with many reviewers considering this is his finest acting performance.

An icon to millions as Superman, Hollywoodland delves deep into the mystery that surrounds the death of George Reeves (Ben Affleck) in his Hollywood home. An exploration of fame and identity, the absorbing drama follows private detective Louis Simo (Adrien Brody) and his investigation into the darker side of Hollywood. As the detective begins to uncover unexpected connections to his own life and learns more about Reeves, the case becomes more personal. Touching on long-standing conspiracy theories, Simo explores Reeves' relationship with fiancé Leonore Lemmon (Robin Tunney), his affair with benefactor Toni Mannix (Diane Lane), the jealousy of Hollywood heavyweight Eddie Mannix (Bob Hoskins) and the final verdict of suicide following his personal struggle with being typecast as the 'man in tights'.

With strong performances from a cast of Hollywood favourites, Hollywoodland takes you to the heart of 1950's Tinseltown glamour and underneath the suit of a complex man, both blessed and cursed by his most famous role. A host of DVD extras will continue to explore the mystery with a 'behind the headlines' look at the facts surrounding Reeves' death, a feature on how Hollywood has changed in the last 60 years and a detailed explanation of how the Hollywood look was recreated for the film. This all combines to make Hollywoodland a must-own DVD, available from 19th March 2007.

June 16, 1959. The glamour of Tinseltown permanently fades for actor George Reeves, the star of the Adventures of Superman, as the actor dies in his Hollywood Hills home. Felled by a single gunshot wound, Reeves leaves behind a fiancé, aspiring starlet Leonore Lemmon, and millions of fans who are shocked by his death. But it is his grieving mother, Helen Bessolo, who will not let the questionable circumstances surrounding his demise go unaddressed.

Helen seeks justice, or at least answers. The Los Angeles Police Department closes the case, but Helen hires - for $50 a day - private detective Louis Simo. Simo soon ascertains that the torrid affair Reeves had with Toni Mannix, the wife of MGM studio executive Eddie Mannix, might hold the key to the truth.