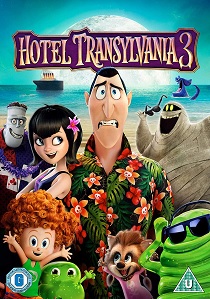 The Drac Pack is back with Hotel Transylvania 3, released on 4k Blu-ray, Blu-ray and DVD 3rd December 2018 from Sony Pictures Home Entertainment.

This must-own family comedy, which has grossed more than $425 million in theaters worldwide to date, follows in the tradition of the blockbuster Hotel Transylvania franchise when Mavis surprises Dracula with a family voyage on a luxury, haunted monster cruise ship. Of course, the rest of the Drac Pack has to tag along, and that's when things get a little batty.

The monsters are having a great time, indulging in all of the shipboard fun the cruise has to offer, from monster volleyball to colossus-sized buffets and exotic excursions, but then the unexpected happens when Drac falls for the ship's mysterious (and dangerous) human captain Ericka. The third film in this family-friendly monster franchise is the best reviewed installment and you're invited along on the haunted cruise vacation!

Hotel Transylvania 3 is filled with more than an hour of engaging bonus materials including three "All-New Scary-Oke Sing Alongs", a monster dance party dance along to "I See Love" by Joe Jonas featuring Jonas Blue, plus a fun zing-tastic read along with Drac. Families can enjoy all the frightful fun with a "Plan Your Own Spook-tacular Sleepover" feature and "Vampire Make Over: Mavis and Drac Tutorial," and go behind-the-scenes to explore the amazing talent who bring these characters to life in "Behind the Screams - The Voices of Hotel Transylvania 3".

3D-BD
Following the global success of Godzilla and Kong: Skull Island comes the next chapter in the cinematic Monsterverse in Godzilla II: King of the Monsters, arriving on DVD, Blu-ray and 4K UHD 7th ... END_OF_DOCUMENT_TOKEN_TO_BE_REPLACED
Hot PicksView