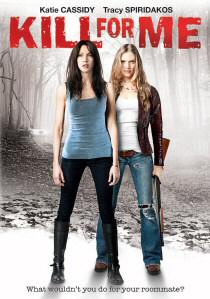 College roommates bond over a shared violent past and a future which holds deadly consequences in the new thriller Kill For Me, available on DVD 20th May 2013 from Sony Pictures Home Entertainment.

Katie Cassidy (TV's Arrow) and Tracy Spiridakos, star of NBC's new hit Revolution, lead a hot, young cast in this suspenseful tale of two young women who bond over their struggles with bad men and realise how far they would need to go to protect each other. Directed by Michael Greenspan (Wrecked) and co-starring Ryan Robbins (TV's Falling Skies) and Donal Logue (Shark Night 3D), the DVD will include a behind-the-scenes look at the making of the film, featuring interviews with the cast and crew.

Synopsis: While trying to move on from an abusive ex-boyfriend, Amanda (Cassidy) looks for a roommate to help pay the rent. Hailey (Spiridakos) just moved to college to get away from her own abusive past. Now roommates, both girls find comfort in their friendship and make a pact to help each other overcome their pasts. no matter what the cost. When Amanda's abusive ex-boyfriend catches up with her, a riveting roller coaster of suspense and twists is set in motion. In order to survive, the two girls face their harrowing past together. But as Hailey's past becomes more transparent, it's difficult to decipher who is the victim and who is the cold-blooded killer.

Kill For Me was written by Christopher Dodd & Michael Greenspan and Christian Forte. It was produced by Kyle Mann. It has a run time of approximately 91 minutes and is rated 18.

DVD
Sam Mendes, the Oscar®-winning director of Skyfall, Spectre and American Beauty, brings his singular vision to his World War I epic, 1917 to DVD, Blu-ray and 4K Blu-ray 18th May 2020 from ... END_OF_DOCUMENT_TOKEN_TO_BE_REPLACED
Hot PicksView