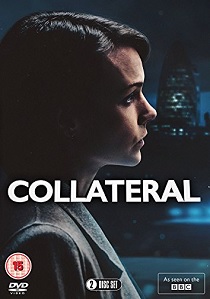 The killing seems professional, but the only witness - a young woman strung out on drugs on the street corner - gives the police a false name and address. Local MP David Mars (John Simm) arrives to comfort his ex-wife Karen (Billie Piper), the customer of the fatal pizza delivery.

Kip and Nathan track down Abdullah's home, a set of garages, to find his sisters, Fatima (Ahd Kamel) and Mona (July Namir). The sisters are scared and Kip's convinced they're hiding something.

Meanwhile Mikey takes a beating from two men he tries to warn about the police investigation. And manageress Laurie returns home to care for her ageing mum... unaware that two shady figures are watching her every move.

Collateral is released on DVD and Blu-ray 26th March 2018 by Spirit Entertainment Limited and includes subtitles for the Hard of Hearing.