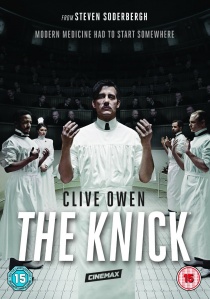 Hailed as 'well-written, superbly shot and brilliantly acted' (The Huffington Post), The Knick is a 'super prestigious and fascinating new drama' (Heat) that takes you on a journey back in time, providing 'a gripping account of the birth of modern medicine' (The Times). The Knick: The Complete First Season becomes available to buy on Blu-ray and DVD on 17th August 2015 from HBO Home Entertainment UK. The Knick is also now available to own and watch instantly via Amazon Instant Video, blinkbox, Google Play, iTunes, Wuaki.tv & Xbox Video.

As seen on Sky Atlantic, a brilliant surgeon pushes the boundaries of medicine, morality and race relations at a New York City hospital at the turn of the 20th Century in Season One of this 10 episode, ground-breaking medical drama. Steven Soderbergh's Oscar®-winning-eye tells the story of Dr. John Thackery (Golden Globe® nominee Clive Owen; Bourne Identity, Children of Men, Inside Man) and his groundbreaking work at The Knickerbocker Hospital (a.k.a. "The Knick") which faces a major upheaval due to an exodus of affluent patrons, an infusion of poor patients, and gross mismanagement of its finances.

As he searches to solve a plethora of medical mysteries and develops a cocaine habit, Thackery must deal with a variety of co-workers and patients, including driven new arrival, Dr. Algernon Edwards (Andre Holland; Bride Wars) and the wealthy and influential Cornelia Robertson (Juliet Rylance; Sinister, Frances Ha, Animal).