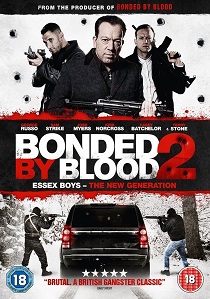 Sawn-off shotguns, strip clubs and dodgy deals are the name of the game as a new firm take over in Essex, in this blood-soaked sequel to the gangster hit featuring the cream of young British acting talent, including Sam Strike and George Russo, and the screen debut of stunning glamour model and tabloid favourite Casey Batchelor.

The infamous Rettendon Range Rover murders - the culmination of a bloody drug gang war - has left a power vacuum in the Essex criminal underworld. A new gang move in to take up the mantle - they're younger, leaner and more ruthless and ferocious than what has gone before. But their fast rise to the top and their simmering egos mean it isn't their old school rivals they need to worry about - but each other.

Based on the bestselling book by acclaimed true crime writer, and one of the last surviving Essex Boys, Bernard O'Mahoney, Bonded By Blood 2 is the real deal - a gritty British gangster film following on from where the first film left off, introducing a ruthless new criminal gang who don't do things by halves.

Bonded By Blood 2: The New Generation, is out on DVD and Blu-ray 22nd May 2017 from Kaleidoscope Home Entertainment.