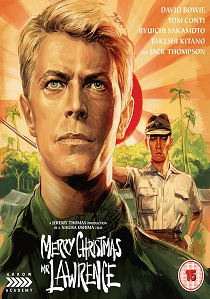 In 1942, British officer Major Jack Celliers (Bowie) is captured by Japanese soldiers, and after a brutal trial sent, physically debilitated but indomitable in mind, to a POW camp overseen by the zealous Captain Yonoi (Ryuichi Sakamoto). Celliers' stubbornness sees him locked in a battle of wills with the camp's new commandant, a man obsessed with discipline and the glory of Imperial Japan who becomes unnaturally preoccupied with the young Major, while Lieutenant Colonel Lawrence (Tom Conti), the only inmate with a degree of sympathy for Japanese culture and an understanding of the language, attempts to bridge the divide through his friendship with Yonoi's second-in-command, Sergeant Hara (Takeshi Kitano), a man possessing a surprising degree of compassion beneath his cruel façade.

Produced by Jeremy Thomas (The Last Emperor, The Sheltering Sky), it was the first English-language film by Oshima (Death by Hanging, In the Realm of the Senses, Gohatto), a leading light of Japanese New Wave cinema, and provided breakthrough big-screen roles for comedian Takeshi Kitano and musician Ryuichi Sakamoto, who also composed the film's hauntingly memorable BAFTA-winning score. This powerful wartime drama was adapted from Laurens van der Post's autobiographical novel 'The Seed and the Sower' (1963) by screenwriter Paul Mayersberg (The Man Who Fell to Earth).