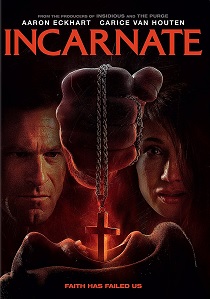 When a young boy shows terrifying signs of demonic possession, an exorcist is called upon to face the evil that lives within in Incarnate, available on DVD on 17th April 2017 from Universal Pictures (UK).

From the producers of The Purge and Insidious, comes this terrifying supernatural thriller starring Aaron Eckhart and Carice van Houten (Game of Thrones). When an 11-year-old boy (David Mazouz, Gotham) becomes possessed by an evil spirit, an unconventional exorcist, Dr. Seth Ember, who uses science instead of religion to tap into the mind of the possessed to remove the demon from their subconscious, is called upon by the Vatican to expel the malevolent spirit. When Ember enters the mind of the boy to attack the vengeful demon, he finds himself facing the battle of his life and the horrors of his own past.

Directed by Brad Peyton (San Andreas, Journey 2: The Mysterious Island), produced by Blumhouse Productions' Jason Blum (Paranormal Activity, Insidious, The Purge), and starring Aaron Eckhart (Sully, Bleed For This, The Dark Knight) as Dr. Seth Ember, Incarnate delivers spine-tingling chills as Ember confronts unspeakable terror to save a family from the vicious demon that has invaded their lives.