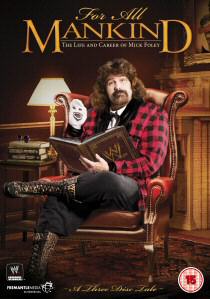 For All Mankind: The Life And Career Of Mick Foley (2013)

Mick Foley, the man known as Mankind, Dude Love and Cactus Jack, has done so much during his career (both in and out of the ring). Now it's finally documented in one package featuring over six hours of content that includes a biography and many of his matches when For All Mankind: The Life And Career Of Mick Foley is released on DVD and Blu-ray from FremantleMedia on 22nd April 2013.

Friends, family, peers and the Hardcore Legend himself detail his story from being Mrs. Foley's baby boy in Long Island, New York to becoming an international Superstar, philanthropist and author. Get inside commentary on his brutal matches in ECW and Japan, struggles in WCW, his notorious Hell in a Cell matches and the fascinating evolution in WWE as Cactus Jack, Mankind, Dude Love and all the unparalleled successes in between. Plus, take home bonus matches and moments spanning his entire career.