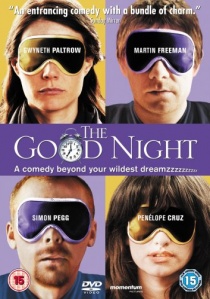 Featuring a dream cast headed by Martin Freeman (The Hitchiker's Guide to the Galaxy, The Office), Gwyneth Paltrow (Sylvia, Shallow Hal, Shakespeare in Love), Penelope Cruz (Volver, Sahara, Vanilla Sky) and Simon Pegg (Run Fatboy Run, Hot Fuzz, Shaun of the Dead), the comedy drama The Good Night can be yours to own on DVD from 26th May 2008 courtesy of Momentum Pictures.

Jake Paltrow's first feature is an assured piece of film-making that blurs the lines between dreams and reality and comedy and drama. As refreshing and delightful as a good night's sleep, The Good Night features excellent performances all round, with Martin Freeman's delightfully self-effacing performance perfectly balanced by Paltrow's prickly, witty characterization, Cruz's seductiveness and Pegg's bastard best friend role. Add to this the comic charm of Danny DeVito as an eccentric, post beat era, new age idealist named Mel, and you have a dream of film.

Has-been musician Gary's (Freeman) days in a successful band with the world at his feet are long gone. Now he spends his days writing ad jingles, and whose only escape from the suffocating relationship he has with both his former bandmate (Pegg) and girlfriend (Paltrow) is in his sleep, where he encounters, literally, the woman of his dreams (Cruz). With Gary's fantasy life increasingly infected by his reality, the moving denouement heralds the power and necessity of dreams and a bittersweet acknowledgment of their limitations.

But Gary can only be with Anna in sleep which consequently sends him on a quest for more frequent slumber. With the help of a new age guru named Mel, (Danny DeVito) Gary shuns reality for the comfort of his dreams even as the troubles of his waking life increase "The reason we wanted to cast Martin as Gary", says Producer Donna Gigliotti, "and the reason we did was because he has tremendous humanity as an actor. You immediately love him, you want to watch him, and you care about what happens to him. It almost doesn't matter what he's doing, you feel great empathy for him."