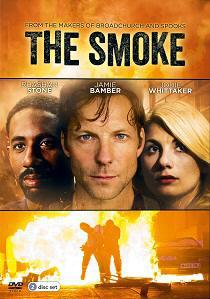 Brand new hard-hitting drama The Smoke, from the creators of Broadchurch, makes its DVD bow on 14th April 2014 courtesy of Acorn Media, following its run on Sky One.

Written by acclaimed writer Lucy Kirkwood (Skins), The$ Smoke is a show about ordinary men and women, about fire-fighters, and heroes, about life and death stories of risk and rescue. Charged with adrenaline, gut-wrenchingly emotional, surprisingly funny, and often outrageously audacious, it's a show with big thrills, huge heart, and characters who leave an indelible mark.

Kev Allison (Jamie Bamber - Battlestar Gallactica) is a seasoned fire-fighter and the leader of the crew at White Watch. Being a hero is part and parcel of how he sees himself as a man: it's in his blood and who he is. But his life is about to change when he's called to the worst fire of his career... and every belief Kev held sacred about being a firefighter, and serving the public, is about to be turned on its head.

Jodie Whittaker (Broadchurch) plays Trish, Kev's girlfriend, who is striving to hold on to love and hope against the odds, while Rhashan Stone (Bodies) is Kev's best mate Mal, whose loyalty is tested to the extreme. Then there's the rest of the watch: Little Al (Gerard Kearns - Shameless), Ziggy (Pippa Bennett-Warner - Southcliffe) Rob (David Walmsley), Billy (Dorian Lough - Trial and Retribution), and the mysterious Dennis (Taron Egerton - Inspector Lewis), the new boy on the team who has something to hide.

The White Watch crew set screens alight in this stunning series that defies all expectations.