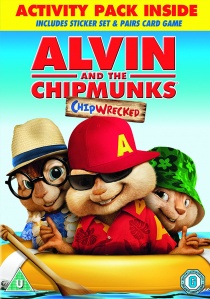 The cheekiest chipmunks in town are back and more adorable and mischievous than ever as Alvin & The Chipmunks : Chipwrecked arrives on DVD and Triple Play on 2nd April 2012, from Twentieth Century Fox Home Entertainment.

Travelling to the prestigious International Music Awards in style, Alvin, Simon and Theodore are joined by the sassy Chipettes (Eleanor, Jeanette and Brittany) and their long-suffering guardian, Dave (Jason Lee, TV's My Name Is Earl, The Incredibles). But when Alvin's latest cheeky stunt goes awry, all of them find themselves stranded on a desert island that isn't quite the paradise it first appears.

With hidden treasure, dangerous castaways and a host of hilarious antics - not to mention a brand new selection of recent pop hits that have been given the chipmunks treatment - Alvin & The Chipmunks : Chipwrecked is the gang's most exciting, freshest adventure yet.

What's more, the DVD and Triple Play editions come jam-packed with extra features including Chipmunks music videos, featurettes like Munking Movies In Paradise and a brilliant value digital copy so you can keep up with all the action on the move. The film is also the perfect Easter gift, coming with an activity pack containing stickers, name labels and a brilliant card-match game to keep little hands and minds busy! And for real Chipmunk fans there are even DVD and Blu-ray box sets to make sure they're fully up to date!

So get your squeak on and join the gang when Alvin & The Chipmunks : Chipwrecked lands on DVD and Triple Play this Easter! 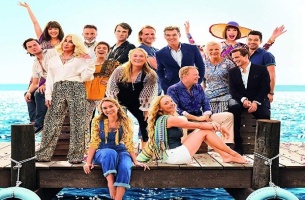 UHD
Bring family and friends together and have the time of your life with Mamma Mia! Here We Go Again, the all-new smash-hit romantic comedy based on the songs of ABBA, released on DVD, Blu-ray and 4K UHD ... END_OF_DOCUMENT_TOKEN_TO_BE_REPLACED
Hot PicksView