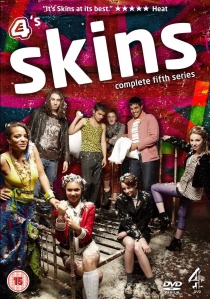 E4's multi BAFTA award-winning drama Skins is back for its fifth series and a third generation of cast. With more sex, booze, drugs and anarchy than ever, Skins: Series 5 is to be the most raucous series and is now available to own on DVD 21st March 2011 from 4DVD.

Getting drunk, high, laid and up in time for college the next day, Skins Series 5 introduced us to eight rebellious yet completely unique teenagers. Following the lives of four boys and four girls, series 5 sees prissy princesses put in their place, outsiders find theirs, hate turn into love and the girls finally taking over, taking charge and taking names...

There's Mini (Freya Mavor), the leader whose strong exterior and controlling nature hides a vulnerable young girl. Liv (Laya Lewis), Mini's second in command, a clumsy but beautiful party animal with a big heart. Grace (Jessica Sula), who seems pure as the driven snow, but even her best friends don't really know her. And into this group of best mates crashes Franky (Dakota Blue Richards): super-intelligent, strange and androgynous. The universe bends to her difference and weirdness, and so do these girls - eventually.

DVD
With a mission of building from scratch an entirely new race car with the potential to defeat Ferrari at the 1966 Le Mans World Championship, att Damon and Christian Bale star in Le Mans '66,released ... END_OF_DOCUMENT_TOKEN_TO_BE_REPLACED
Hot PicksView