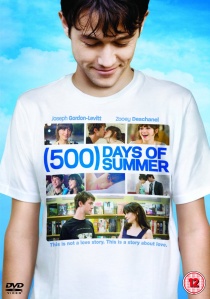 Smart, sexy and funny - the cool and original 500 Days of Summer comes to Blu-ray & DVD on 18th January 2010 from Twentieth Century Fox Home Entertainment. Staring Joseph Gordon-Levitt and Zooey Deschanel, this offbeat story reveals the highs and lows of an unravelling relationship.

The realities of love are laid bare with "a fresh and imaginative sense of visual style, unlike just about every romantic comedy I've seen in the last twenty years" (Nick Hornby). Thorny yet exhilarating, funny yet sad, this account of love and relationships is full of unexpected twists and turns. As is the case with many real-life relationships, it highlights that something of value can be salvaged, even when heartbreak and unrequited love may threaten to tear them apart.

When Tom (Gordon-Levitt; 30 Rock) a hapless greeting card copywriter and hopeless romantic is blindsided after being dumped by girlfriend Summer (Deschanel; Yes Man, Failure to Launch), he shifts back and forth through various periods of their 500 days "together" trying to understand what went wrong. With mates Paul (Matthew Gray Guble; The Life Aquatic with Steve Zissou) and McKenzie (Geoffrey Arend; Garden State) on side to offer friendly advice and pick up the pieces, Tom's fragile emotional state is further damaged when Summer twists the knife again with a shock revelation!

Traumatised, Tom goes into meltdown and ceases to care about anything other than Summer in an attempt to win her back. Immersing himself in a period of introspective self-examination, his reflections ultimately lead him to finally rediscover his true passions in life, but has he truly emerged a changed man?

500 Days of Summer has a cool and eclectic soundtrack, featuring The Smiths, Wolfmother, Carla Bruni and Doves. The fantastic special features include featurettes from the Sundance Film Festival, Director's commentary and deleted scenes, taking you further behind-the-scenes of this unique and touching tale on Blu-ray and DVD.