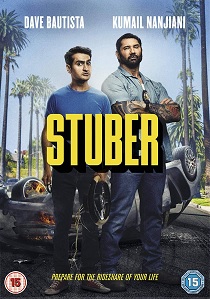 Your ride is about to arrive, with Stuber coming to DVD 18th November 2019 from Twentieth Century Fox Home Entertainment.

Get ready for the ride of your life in this high-speed buddy comedy fueled by huge laughs and nonstop action! When a mild-mannered driver named Stu (Kumail Nanjiani; Silicon Valley) picks up a passenger (Dave Bautista; Guardians of the Galaxy) who turns out to be a cop hot on the trail of a brutal killer, Stu is thrust into a harrowing ordeal in which he desperately tries to hold onto his wits, his life and his five-star rating.

DVD
Almost four decades after he drew first blood, Sylvester Stallone is back as John Rambo in a deadly journey of vengeance as Rambo: Last Blood is released on DVD, Blu-ray and 4K UHD 13th January 2020 ... END_OF_DOCUMENT_TOKEN_TO_BE_REPLACED
Hot PicksView