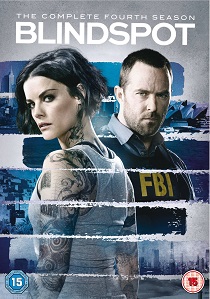 A beautiful woman (series star Jaimie Alexander) is found in Times Square, her memory erased, her body fully covered in a series of coded tattoos. But as "Jane Doe" and the FBI team who discovered her - including agents Kurt Weller (series star Sullivan Stapleton), Edgar Reade (series star Rob Brown), Tasha Zapata (series star Audrey Esparza) and the tech savvy Patterson (series star Ashley Johnson) - work to decipher, investigate and solve the complex treasure map of her body, an ever-widening web of conspiracy and corruption is revealed, as is the truth behind Jane Doe's real identity and the identity of the people who sent her to the FBI in the first place.

Following the emotionally charged third season finale, Blindspot returns for its fourth season. As we learned in the finale, Jane is being poisoned by ZIP, the very drug used to wipe her memory at the premiere of the series. Also suffering from the disease, her brother Roman (Luke Mitchell) was searching for a cure and hid caches of data all over the globe. The team will follow a trail of cryptic breadcrumbs that lead to all-new crimes to solve and, with any luck, a cure to save Jane. Season four begins with Weller on the brink of death, Remi (Alexander) returned from the depths of Jane's mind and Zapata working with the bad guys.

Not knowing that Zapata has joined the villainous HCI Global, Reade tries desperately to find her. At the same time, Patterson hunts to cure Jane with Rich DotCom (new series regular Ennis Esmer). Embracing last season's global scope, season four starts with a daring heist in Tokyo, and action-packed missions will take the team all over Europe and South America.

DVD
With a mission of building from scratch an entirely new race car with the potential to defeat Ferrari at the 1966 Le Mans World Championship, att Damon and Christian Bale star in Le Mans '66,released ... END_OF_DOCUMENT_TOKEN_TO_BE_REPLACED
Hot PicksView