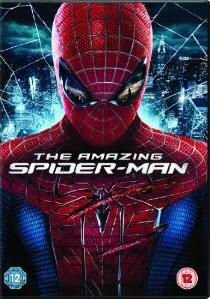 One of the most beloved and iconic super heroes of all time reemerges in The Amazing Spider-Man, debuting on Blu-ray 3D, Blu-ray and DVD with UltraViolet on 26th November 2012 from Sony Pictures Home Entertainment. Presented for the first time in at-home 3D, The Amazing Spider-Man tells the story of teenage Peter Parker, who grapples with both high school and amazing super-human crises as his alter-ego Spider-Man battles The Lizard.

The Blu-ray comes with two discs:

The Blu-ray 3D contains all the features included on standard Blu-ray as well as exclusive special features including an image progression reel and the "3D 101 with Marc Webb" featurette, providing a look at the 3D techniques used for the film and allowing viewers to toggle through three scenes from the film at different levels of 3D.

The Amazing Spider-Man is the story of Peter Parker (Garfield), an outcast high schooler who was abandoned by his parents as a boy, leaving him to be raised by his Uncle Ben (Sheen) and Aunt May (Field). Like most teenagers, Peter is trying to figure out who he is and how he got to be the person he is today. When Peter discovers a mysterious briefcase that belonged to his father, he begins a quest to understand his parents' disappearance - leading him directly to Oscorp and the lab of Dr. Curt Connors (Ifans), his father's former partner. As Spider-Man is set on a collision course with Connors' alter-ego, The Lizard, Peter will make life-altering choices to use his powers and shape his destiny to become a hero.

Based on the Marvel comic book by Stan Lee and Steve Ditko, The Amazing Spider-Man was directed by Marc Webb from the screenplay by James Vanderbilt and Alvin Sargent and Steve Kloves and a story by James Vanderbilt. Stan Lee, Kevin Feige and Michael Grillo served as executive producers, with Laura Ziskin, Avi Arad and Matt Tolmach as producers.