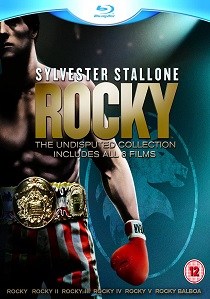 Round 1! Step up and experience all the Rocky films up close & personal, together for the first time in stunning high-definition when Rocky: The Undisputed Collection makes its Blu-ray debut as a stunning 7 disc box set from Twentieth Century Fox Home Entertainment.

Sylvester Stallone is boxer Rocky Balboa in a role hailed as as a "once-in-a-lifetime coming together of man and material" (Los Angeles Times). Winner of three Academy AwardsÒ including Best Picture, the original Rocky and it's equally powerful and action-packed successors are presented in their best-ever picture and outstanding HD audio in this 'must-own' knock-out Blu-ray collection.

The most inspirational sports themed franchise of all time, Rocky enters the ring as the champion of box-sets with this awe-inspiring collection, capturing every exhilarating moment on blu-ray with stunning picture clarity and mind-blowing sound. The Blu-ray collection features an exclusive bonus disc with a brand-new interactive trivia game 'Feeling Strong Now', as well as being packed with special features including a three-part 'making of' documentary, a video commentary by Sylvester Stallone and numerous behind-the-scenes featurettes - the ideal accompaniment to Rocky's unforgettable journey, both inside and outside the ring.

Celebrate the power of Blu-ray and one of the greatest inspirational sagas and most riveting performances of all time with Rocky: The Undisputed Collection. A bell-ringing perfect Christmas present, this definitive box-set is guaranteed to keep punching above its weight all the way through the seasonal period.

Rocky (1976) Nominated for ten Academy Awards® and winner of Best Picture. Featuring a dynamic musical score, thrilling fight sequences and four Oscar-nominated performances, this rousing crowd-pleaser will send spirits soaring. Rocky Balboa (Stallone) is a Philadelphia club fighter who seems to be going nowhere. But when a stroke of fate puts him in the ring with a world heavyweight champion, Rocky knows that it's his one shot at the big time - a once in a lifetime opportunity to go the distance and come out a winner!

Rocky II (1979) Rocky's dreams of winning the title are shattered when his doctor advises him to stay away from the sport due to a serious eye injury. Leading a 'regular' life however, becomes more difficult than Rocky ever anticipated. Although he has earned a healthy bankroll from his boxing days, this leads to overspending and also attracts worthless hangers-on. Adrian becomes pregnant, which leads Rocky to re-examine his current situation. Meanwhile, Apollo Creed, offended by so many who thought he actually lost the fight, begins to publicly taunt him...

Rocky III (1982) At a ceremony in his honour, Rocky is celebrated with a bronze statue on the steps of City Hall. The champ thanks the crowd and begins an unexpected retirement speech, but is interrupted by the fierce No.1 contender, Clubber Lang. Lang accuses Rocky of being a coward and insults Adrian, and a fiasco breaks out.

Rocky IV (1985) Rocky faces another formidable challenge in his career. This time in the form of a Russian boxer named Drago (Dolph Lundgren), an almost inhuman giant fighting-machine created in Russian physical-fitness laboratories.

Rocky V (1990) Rocky discovers that his years of boxing have caused irreparable brain damage. Adding insult to injury, he also learns that his accountant has not only gambled and lost all of his money, thanks in part to his brother-in-law Paulie, but he owes a fortune to the Internal Service as well. To cover the IRS Rocky must sell everything, move out of his mansion and back to the modest surroundings of South Philadelphia - back to his roots.

Rocky Balboa (2006) A retired Rocky's quiet world is suddenly rocked when the current world champion Mason 'The Line' Dixon (Antonio Tarver) throws down a challenge after a computer-simulated match hails an in-his-prime Rocky as victorious over him. Not one to back down, Rocky commits to the unthinkable - he agrees to the fight of his life and pushes himself to the breaking point to go the distance one last time.