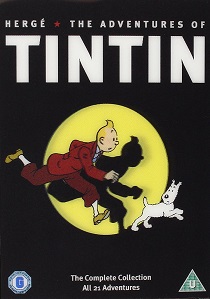 Get ready for the ultimate voyage when all 21 of the original Tintin animated adventures (completely re-mastered in stunning high-definition) are released by Anchor Bay Entertainment as DVD & Blu-ray box sets for the first time ever on 10th October 2011.

Created by Belgian comic writer Hergé in 1929, Tintin has proven timeless and one of the most iconic and instantly recognisable figures of the past 100 years, with more than 350 million books sold worldwide and translated in to 80 different languages. Tintin continues to have influence on popular culture, inspiring a host of celebrity fans and even the dedicated study of Tintin - Tintinology!

Presented over 5 discs and with 840 minutes of the original animation that inspired the upcoming Steven Spielberg and Peter Jackson motion capture adaptation hitting cinemas 26 October, this is your chance to relive (or introduce the family to) the original - Tintin, the world's most famous boy reporter. With his faithful dog Snowy at his side, the intrepid pair travel the globe to investigate exciting cases. Along the way they encounter a colourful cast of characters who have become familiar to generations of children and adults. Captain Haddock, Thompson and Thomson and Professor Calculus are amongst the most cherished personalities.

The Adventures of Tintin disc boxset includes the following adventures:The Crab With The Golden Claws, The Secret Of The Unicorn, Red Rackham's Treasure, The Cigars Of The Pharaoh, The Blue Lotus, The Black Island, The Calculus Affair, The Shooting Star, The Broken Ear, King Ottokar's Sceptre, Tintin In Tibet, Tintin And The Picaros, Land Of Black Gold, The Red Sea Sharks, Flight 714, The Seven Crystal Balls, Prisoners Of The Sun, Tintin In America, The Castafiore Emerald, Destination Moon, Explorers On The Moon

Whether you grew up with these classic adventures or are a newcomer, The Adventures of Tintin will make the perfect family-friendly Christmas gift this year.

BD
The surviving members of the resistance face the First Order once again, and the legendary conflict between the Jedi and the Sith reaches its peak as Star Wars: The Rise of Skywalker is released on ... END_OF_DOCUMENT_TOKEN_TO_BE_REPLACED
Hot PicksView