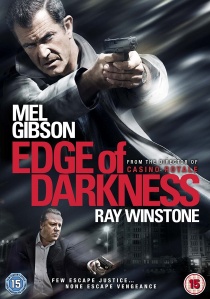 Icon Home Entertainment is pleased to announce the highly anticipated 14th June 2010 Blu-ray and DVD release of the emotionally charged crime thriller Edge Of Darkness. Starring Mel Gibson in his first leading role since 2002's "Signs" and Ray Winstone (Sexy Beast, The Departed), Edge Of Darkness is an edgy, ruthless revenge thriller that sees Gibson return to his action-packed best.

When Craven's only child, twenty-four year old Emma (Bojana Novakovic), is murdered on the steps of his home, everyone assumes that he was the target. He soon suspects otherwise. His investigation leads him into a dangerous world of corporate cover-ups, government collusion, intrigue and murder. Along with CIA operative Darius Jedburgh (Ray Winstone), who has been sent in to clean up the evidence, their solitary search for answers about Craven's daughter's death transforms into an odyssey of emotional discovery and redemption.

Edge Of Darkness is based on the popular BBC television series of the same name. Comprised of six episodes, the TV series was first broadcast on BBC2 in 1985, and received critical acclaim and an average of 4 million viewers per episode. Edge of Darkness feature film director, Martin Campbell, also directed the original BBC TV series, which earned him a British Academy Television Award for Best Direction.