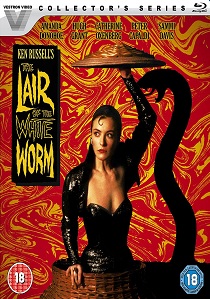 Hugh Grant, Amanda Donohoe, and Catherine Oxenberg star in this mix of heartstopping horror and campy humour in Lair of the White Worm, released as a special edition on Blu-ray 26th February 2018 from Lionsgate Home Entertainment.

James D'Ampton (Grant) returns to his country castle in England. Legend has it that James's distant ancestor once slayed the local dragon - a monstrous white worm with a fondness for the sweet flesh of virgins. The young lord dismisses the legend as folklore, until archeology student Angus Flint explores James's property and unearths a massive reptilian skull and a pagan snake god's ancient site of worship.

When James's virtuous girlfriend, Eve Trent (Oxenberg), suddenly disappears, James and Angus set out to investigate the foreboding cavern said to be the worm's lair, here a centuries-old mystery begins to uncoil.

Related Articles
Paddington 2, A Very English Scandal, Paddington 2, Florence Foster Jenkins, The Man from U.N.C.L.E., The Rewrite, The Pirates! In An Adventure With Scientists, Did You Hear About the Morgans?, About a Boy, Bridget Jone's Diary, Bridget Jones: The Edge of Reason, Small Time Crooks, Two Weeks Notice, The Gentlemen
Starship Troopers 3: Marauder, Blue Iguana
Paddington 2, Paddington 2, Doctor Who: Twice Upon A Time, Doctor Who: Series 10 Part 1, Class: Series 1, Doctor Who: Series 9, The Suspicions of Mr Whicher: Complete, The Musketeers, The Fifth Estate, The Thick of It: Series 4, In The Loop, Christopher Robin, The Personal History of David Copperfield
Crimes Of Passion
Comments
UHD Releases News Pick

UHD
Mega-action hero Liam Neeson stars as a father in search of answers after his son is mysteriously murdered in Cold Pursuit, arriving on 4K UHD, Blu-ray and DVD 24th June 2019 from StudioCanal. END_OF_DOCUMENT_TOKEN_TO_BE_REPLACED
Hot PicksView