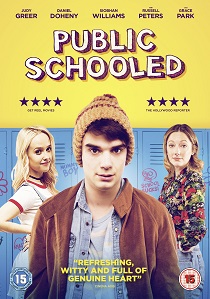 When Liam (TIFF Rising Star Daniel Doheny) spots one-legged beauty Anastasia during a visit to his town's local school, he's instantly hooked. Determined to find a way of getting closer to her, and fed up with his sheltered existence, Liam persuades the principle and his mom, Claire (Judy Greer; Jurassic World, Ant-Man, Dawn of the Planet of the Apes), to give him a chance to try out high school life for himself.

As her beloved son navigates a new and unfamiliar world of sex, drugs and social studies, and struggles to impress a girl who doesn't even know he exists, his mom/best friend decides it's time to teach him the ropes of teenage rebellion.

b}Public Schooled had its World Premiere at TIFF and was selected as one of Canada's Top 10 Features of 201. It also won the Best Comedy Feature Film at the 2017 Edmonton International Film Festival.

UHD
Will Smith and Martin Lawrence are back on the case in the roles that launched the dynamic duo to global superstardom in Bad Boys For Life, arriving on DVD, Blu-ray and 4K UHD 25th May 2020 from Sony ... END_OF_DOCUMENT_TOKEN_TO_BE_REPLACED
Hot PicksView