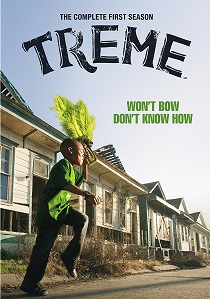 From David Simon, the award winning creator of The Wire and Generation Kill, HBO Home Entertainment announces the 18th April 2011 DVD and Blu-ray release of the two-time Emmy® nominee Treme The Complete First Season further cementing HBO as a pioneer of innovative and challenging programming.

Receiving its UK television premiere on Sky Atlantic HD on 18 February this double Emmy® and Grammy® award nominee will be available to pre-order on DVD and Blu-ray from the same day. Treme uncovers the stories behind the aftermath of the greatest man-made disaster in American history - Hurricane Katrina and the subsequent levee failure that caused the near death of a city.

The sprawling ten-part series follows musicians, chefs, Mardi Gras Indians and ordinary New Orleanians as they try to rebuild their lives, their homes and their unique culture three months after the greatest calamity to ever befall the Southern States. The very first scene hit with the reality of a disaster that impacts on every possible level, physically, emotionally and spiritually. As the series unfolds we experience the stoicism and camaraderie that surfaces in the wake of travesty.

The drama unfolds with the story of Antoine Batiste (Pierce), a smooth talking trombonist who is struggling to make ends meet and his ex-wife and bar owner LaDonna Batiste-Williams (Alexander). Concerned over the disappearance of her younger brother David, unseen since the storm, LaDonna has turned to a local civil rights authority, run by the overburdened and underpaid Toni Bernette (Leo) for help.

The government's inconsistent and ineffectual response to the devastation has spurred Bernette's husband Creighton (Goodman), a university professor of English literature and an expert of local history to become an increasingly outspoken critic of the institutional response.

Elsewhere in the city displaced Mardi Gras Indian chief Albert Lambreaux (Peters) returns to find his home destroyed and his tribe, the Guardians of the Flame, scattered, but he is determined to rebuild. His son Delmond (Rob Brown, Stop Loss, Finding Forrester) an exile in New York playing modern jazz and looking beyond New Orleans for his future, is less sure of his native city's future, while violinist Annie (Lucia Micarelli) and her boyfriend Sonny (Michiel Huisman, The Young Victoria) are young street musicians, living hand-to-mouth, yet seem wholly committed to the battered city.

From the dystopian streets of Baltimore's The Wire, to the rich tapestry of a culturally unique New Orleans, David Simon has once again built a city.

The series features cameos by notable real-life New Orleanians and the talents of many of its extraordinary artists including local legend Kermit Ruffins as well as Elvis Costello, Allen Toussaint, Steve Earle, and Dr John to name but a few. With all this talent, it's unsurprising that the series received two nominations for the 2011 Grammy® Awards (Best Compilation Soundtrack Album for Motion Picture, Television or Other Visual Media, Best Song Written for Motion Picture, Television or Other Visual Media for Steve Earle's This City).