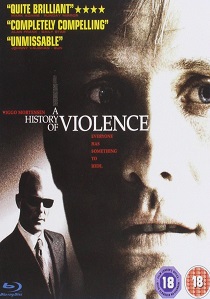 Life's unexpected twists turns and the consequences of the past are at the heart of thrill-packed actioner, A History of Violence. A double Academy Award nominee, this critically acclaimed film will be released on Blu-Ray by Entertainment In Video on 2nd March 2009.

Directed by legendary filmmaker David Cronenberg (The Fly, Crash, Dead Ringers) and based on the graphic novel by John Wagner and Vince Locke, A History of Violence features stunning performances from Viggo Mortensen (The Lord of the Rings trilogy, Hidalgo, Eastern Promises, GI Jane) and Maria Bello (The Mummy: Tomb of the Dragon Emperor, Coyote Ugly, Thank You For Smoking). The strong supporting cast includes Ed Harris (National Treasure: Book of Secrets, Beautiful Mind, The Hours) and Academy Award®-winner William Hurt (The Incredible Hulk, Kiss of the Spider Woman).

Tom Stall (Viggo Mortensen) lives with his lawyer wife (Maria Bello) and their two children in a small Indiana town. One night however their idyllic existence is shattered when two savage criminals attempt to hold up Tom's diner. With surprising efficiency, Stall thwarts their efforts, violently killing them.

Hailed a hero, Tom's life is changed overnight. Before long he is thrust into a national media circus. Recent events also attract the attention of the kind of people who never forget a face - even after twenty years...

When Philly mob boss Carl Fogaty (Ed Harris) arrives in town with his thugs in tow and insists that Tom is someone they've been looking for, Stall vehemently denies the claims. Is it simply a case of mistaken identity - or does Tom indeed have a history of violence?

DVD
With a mission of building from scratch an entirely new race car with the potential to defeat Ferrari at the 1966 Le Mans World Championship, att Damon and Christian Bale star in Le Mans '66,released ... END_OF_DOCUMENT_TOKEN_TO_BE_REPLACED
Hot PicksView