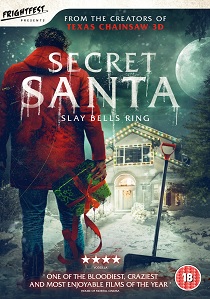 A Christmas Eve gathering takes an unexpected turn after a family guest spikes the punch with a military grade version of truth serum sodium pentothal. The already dysfunctional group comes unstuck in a blizzard of drug-induced, painfully candid outbursts, and upset soon turns to carnage after the head of the family runs amok with a fork, triggering festering loathings and savage reprisals.

The second film to be released under the FrightFest Presents label, the new venture from leading independent distributor Signature Entertainment and leading genre festival FrightFest, Secret Santa debuted at this year's prestigious FrightFest Glasgow, and is the perfect stocking-stuffer for horror fans suffering Halloween withdrawals and in need of a fix of gore and giggles.

Secret Santa takes a fraught family gathering and turns it into a gleefully demented bloodbath as the spiked punch takes hold, hideous home truths are revealed, and the special occasion cutlery is used to slice flesh, not turkey.

If you enjoyed festive horror treats Krampus and Better Watch Out, just wait until you unwrap this jet black comedy shocker, a festive blowout with all the bloody trimmings. If you hate Christmas get-togethers, you'll adore Secret Santa.

BD
Evil resurfaces in Derry as director Andy Muschietti reunites the Losers Club in a return to where it all began with IT Chapter Two, the conclusion to the highest-grossing horror film of all time, ... END_OF_DOCUMENT_TOKEN_TO_BE_REPLACED
Hot PicksView 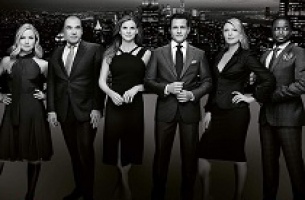 "I guess sometimes the past just catches up with you, whether you want it to or not."