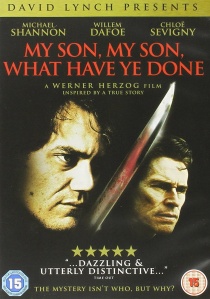 Following the huge critical success of Bad Lieutenant, director Werner Herzog (Encounters At The End Of The World; Rescue Dawn) maintains his brilliant return to form with My Son, My Son, What Have Ye Done, his first collaboration with fellow filmmaker David Lynch (Inland Empire; Mulholland Drive) as executive producer.

Inspired by true events, My Son, My Son, What Have Ye Done tells the peculiar story of Brad Macallum (Shannon), an aspiring actor who commits, in reality, the crime he is to enact in a Greek tragedy in which he is performing.

Called to the scene of a domestic disturbance in suburban San Diego, Detective Hank Havenhurst (Dafoe) arrives on the scene to discover an elderly woman (Zabriskie) lying in a pool of blood and an antique sword lying next to the body. The prime suspect is the woman's son, Brad, who has now barricaded himself inside a nearby house and appears to have taken hostages.

As the events leading up to the murder emerge, via the accounts of several neighbours as well as Brad's fiancée, Ingrid (Sevigny) and his theatrical director Lee (Kier), it becomes apparent that Brad is not so much insane as he is affected and confused by the madness of the world around him. His story proceeds in a non-linear fashion from the quiet suburban neighbourhoods of San Diego to the harsh landscapes of Peru and a Mexican border town, revealing parts of a mystery that only Brad can understand. Meanwhile, outside the house, a SWAT team is moving into position as Brad prepares to deliver one final surprise.

Containing all the cinematic elements that have made Herzog and Lynch's best works at once so menacing, humorous and compelling, My Son, My Son, What Have Ye Done makes for essential viewing and is "a pungent and distinctive work that's at least as good as anything Herzog (or Lynch) has come up with in the past decade" (Tribune Magazine).

My Son, My Son, What Have Ye Done will be released on DVD by Scanbox Entertainment on 27th September 2010.