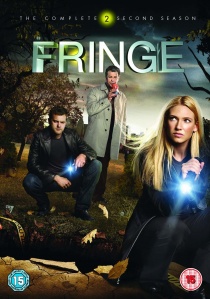 When the unimaginable transpires on screen, you know Fringe creators J.J. Abrams, Alex Kurtzman and Roberto Orci (the team behind Star Trek, Mission: Impossible III and Alias) are behind it. Witness as the impossible becomes possible and worlds literally collide with the release of Fringe: Season Two on 27th September 2010 courtesy of Warner Home Video.

Return to explore the boundaries of a mysterious mythology that holds millions of viewers in its hypnotic grasp. Season two of Fringe contains worlds of excitement complete with shape shifters, cryonic heads, belly-dwelling beasts and people who turn to ashes before our eyes. But the overarching narrative takes the FBI's Fringe Division - which includes Special Agent Olivia Dunham (Anna Torv - The Pacific), formerly institutionalized "fringe" scientist Walter Bishop (John Noble - The Lord of the Rings: The Return of the King) and his son, Peter (Joshua Jackson - Dawson's Creek) - through a mind-bending investigation of a parallel reality that threatens to destroy ours.

In its second season, the mythology behind Fringe revealed itself in increasingly more intriguing ways, and this release features all 23 episodes, including The Unearthed Episode starring Kirk Acevedo as Charlie, plus over four hours of dazzling special features.