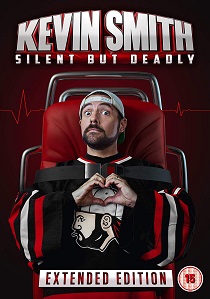 But before he nearly died backstage, he certainly killed it on-stage, speaking frankly, and with his signature casual wit, on personal topics such as his marriage, his friends and family, his passions, and his work (or lack thereof).

Framed against the chilling reality of how life can end all too quick, Silent But Deadly is a warm reminder of Smith's natural gifts as a storyteller, a stand-up and a true performer.

Kevin Smith: Silent But Deadly is released on DVD 27th May 2019 from Kaleidoscope Home Entertainment.

BD
A decade-defining classic from the imagination of Steven Spielberg and Chris Columbus, celebrating its 35 year anniversary, The Goonies is released on 4K UHD 31st August 2020 from Warner Home Video. END_OF_DOCUMENT_TOKEN_TO_BE_REPLACED
Hot PicksView