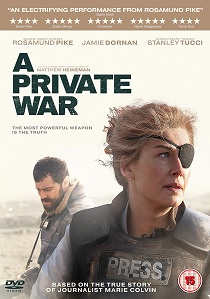 A war correspondent and her photographer risk their lives to uncover the truth in the extraordinary drama, A Private War, arriving on Blu-ray and DVD 10th June 2019 from Spirit Entertainment.

Hailed by critics as "an incredibly sophisticated, psychologically immersive film" (Tim Gray, Variety), A Private War is a love letter to journalism that depicts the passion and fearlessness of those who report from conflict zones. Directed by Academy-Award® nominee and critically acclaimed documentarian Matthew Heineman (Cartel Land, City of Ghosts), the film features a stellar supporting cast including Stanley Tucci (The Hunger Games Franchise) and Tom Hollander (Pirates of the Caribbean Franchise).

In a world where journalism is under attack, Marie Colvin (Pike) is one of the most celebrated war correspondents of our time. Her mission is to show the true cost of war, driving her, along with renowned war photographer Paul Conroy (Dornan), to embark on the most dangerous assignments of their lives as they journey to the frontline of conflicts across the globe.

A Private War on Blu-ray and DVD comes packed with exclusive bonus content including the making of the film, the inspiration behind Annie Lennox's song, and a Q&A with talent moderated by Tina Brown at the Women in the World Summit, taking audiences deeper into Marie Colvin's extraordinary voyage and her incredible and timely true story.

3D-BD
After escaping an attack by what he claims was a 70-foot shark, Jonas Taylor must confront his fears to save those trapped in a sunken submersible as The Meg arrives on DVD, Blu-ray, 3D Blu-ray, 4K ... END_OF_DOCUMENT_TOKEN_TO_BE_REPLACED
Hot PicksView