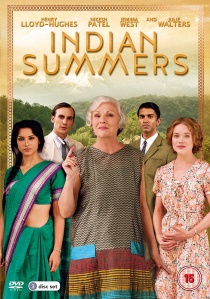 Indian Summers is a brand new lavish production from Channel 4 and their most expensive drama ever. Starring the inimitable Julie Walters, this sizzling period series is currently airing on Sunday evenings and makes its home entertainment bow from RLJ Entertainment's Acorn Label.

India, 1932; Ralph Whelan (Henry Lloyd Hughes - The Inbetweeners, Anna Karenina) the charming Private Secretary with a chequered past, and the rest of the Indian Civil Service begin the annual move to Simla, the small British colony at the foothills of the Himalayas. Antiquated beliefs still remain as the glamorous doyenne of high society Cynthia Coffin (Julie Walters) prepares the exclusive white British Club for the season.

As the summer begins, the British guests and Indian citizens are drawn together and driven apart by class, race, politics, power, promises, secrets, love and theft. But as a nation opens its eyes to the possibilities of freedom, the British Raj begins to falter and the world around them starts to change in the most dramatic of ways. This sumptuous historical 10-part series is due for release as a stunning multi-disc set in both DVD and Blu-ray formats on 20th April 2015.

Ralph's younger sister, Alice (Jemima West - The Mortal Instruments: City of Bones, Lines of Wellington) returns to India looking for freedom with her young son in the aftermath of her husband's death. Aafrin Dalal (Nikesh Patel - Bedlam, Honour) has recently started a career in the Indian civil service, but with his sister Sooni Delal (Aysha Kala - Shameless) fighting for freedom, he soon finds himself dragged deeper and deeper into India's Independent movement.

From glamorous socialite parties to the impoverished lives of orphans, Indian Summers is a sweeping saga - weaving all of life's idiosyncrasies amidst the breath-taking beauty of India, the grandness of its aristocracy, and the wildness of radical youth, driving the country into a new frontier.

There's something in the air, in Indian Summers...