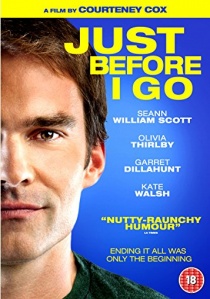 Courteney Cox of TV's Friends makes her feature film directorial debut with Just Before I Go, a bold and wild ensemble comedy, released on DVD by Signature Entertainment on 27th July 2015.

After his wife leaves him, Ted Morgan (Seann William Scott, American Pie) realises he's been treading water for years. In an effort to move forward, Ted decides to return to his hometown one last time to take revenge on the people he feels are responsible for all the hurdles life has thrown at him.

But the more Ted attempts to seek closure and withdraw from his crazy family, the stronger is the pull yanking him back into the chaos of their lives. This breakout Tribeca Film Festival favourite costars Olivia Thirlby (Juno), Rob Riggle (21 Jump Street), Kate Walsh (The Perks of Being a Wallflower), Garret Dillahunt (Looper), Missi Pyle (Gone Girl), David Arquette (Scream), and features original music by Snow Patrol.