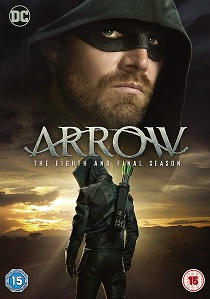 After eight remarkable seasons, Warner Home Video and DC mark the end of an epic era with its final installment of the suspenseful and action-packed series with the release of Arrow: Season 8 on Blu-ray & DVD 25th May 2020.

Get ready for nonstop action from start to finish with all 10 action-packed episodes from the eighth and final season, plus the show's 2019 Comic-Con Panel, the broadcast special Arrow: Hitting the Bullseye and deleted scenes! A limited edition bonus disc featuring all five DC Crossover Event: Crisis on Infinite Earths episodes will be available exclusively for fans who purchase the Blu-ray.

Following the arrival of The Monitor, Oliver Queen left his home, his family, & his team behind to take on his most challenging battle yet, knowing the cost may be his life. But this time it's not just his city he's seeking to protect - it's the entire multiverse! Oliver's quest will send him on a journey where he is forced to confront the ultimate question: what is the true cost of being a hero?