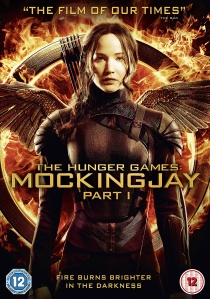 The worldwide phenomenon of The Hunger Games franchise continues to set the world on fire with The Hunger Games: Mockingjay - Part 1 arriving on Blu-Ray and DVD on 16th March 2015 courtesy of Lionsgate Home Entertainment.

Academy Award® winner Jennifer Lawrence leads an all-star cast in the battle for Panem in a spectacular sequel packed with five hours of extensive, must-see bonus materials including the two-hour behind-the-scenes documentary The Mockingjay Lives: The Making of Mockingjay - Part 1. Featuring never-before-seen interviews and on-set footage of the cast and crew, the documentary takes an in-depth look at the making of the film including the script adaptation, location scouting, set design - including physically creating the hovercraft - casting the new characters, and bringing District 13 to life.

Additional special features include Straight from the Heart: A Tribute to Philip Seymour Hoffman, deleted scenes, an audio commentary with director Francis Lawrence and producer Nina Jacobson, as well as the Songs of Rebellion: Lorde on Curating the Soundtrack featurette, the music video for the Golden Globe®-nominated song Yellow Flicker Beat and a brand new sneak peek at The Divergent Series: Insurgent.

Based on the best-selling third novel of Suzanne Collins' award-winning trilogy, with a screenplay by Peter Craig (The Town) and Danny Strong (Lee Daniels' The Butler) and directed by Francis Lawrence (The Hunger Games: Catching Fire), The Hunger Games: Mockingjay - Part 1 reveals that the rebellion is growing. Katniss Everdeen, girl on fire, has survived and is recovering from the cruel and haunting Quarter Quell deep inside the bunkered catacombs of District 13. Separated from some of her closest allies and fearing for their safety in the Capitol, Katniss finally agrees to be the Mockingjay, the symbolic leader of the rebellion. Still uncertain as to whom she can trust, Katniss must help District 13 rise from the shadows, all the while knowing that President Snow has focused his hatred into a personal vendetta against her-and her loved ones.

3D-BD
Still reeling from the aftermath of Captain America: Civil War, Scott Lang is enlisted by Dr. Hank Pym for an urgent new mission in Ant-Man and the Wasp, released on DVD, Blu-ray, 3D Blu-ray and 4K ... END_OF_DOCUMENT_TOKEN_TO_BE_REPLACED
Hot PicksView