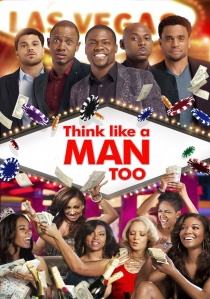 The all-star cast of the box office hit Think Like A Man travel to Las Vegas to continue their shenanigans in Think Like A Man Too, debuting on DVD and Digital HD 26th January 2015 from Sony Pictures Home Entertainment.

In Think Like A Man Too, Michael (Terrence J) and Candace (Regina Hall) are finally getting married. Together with their long-time friends, they head for the glitz and glamour of Las Vegas for the big day. But plans for a romantic getaway go awry when a series of misadventures get them into some compromising situations that threaten to derail the wedding. Also starring in the film is Adam Brody (Life Partners), David Walton (About a Boy), Dennis Haysbert (24) and Jennifer Lewis (Baggage Claim).

Bonus features for Think Like A Man Too include deleted scenes and two all-new featurettes. The Lights, Camera, Vegas! featurette showcases the luxury of Las Vegas and the unprecedented access given by Caesar's Palace during the making of the film, while Comedy Last Vegas Style highlights the humorous side of the cast and crew as they expose their true feelings for one another and their experiences on set. The Ultimate Sequel goes behind-the-scenes with the cast as they share how their characters have grown since the first film.

In the highly anticipated sequel, which was inspired by Steve Harvey's best-selling book Act Like A Lady, Think Like A Man, all the couples are back for a wedding in Las Vegas. But plans for a romantic weekend go awry when their various misadventures get them into some compromising situations that threaten to derail the big event.

BD
You ever hear the one about the cop, the blonde, the psycho and the mafia princess? Birds Of Prey And the Fantabulous Emancipation of One Harley Quinn, coming to DVD, Blu-ray and 4K UHD 20th June 2020 ... END_OF_DOCUMENT_TOKEN_TO_BE_REPLACED
Hot PicksView