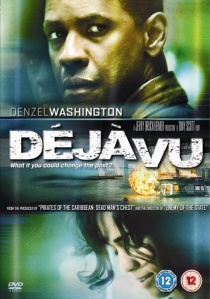 Déjà Vu on Blu-ray Disc, the next generation in home entertainment, brings this thrilling action-adventure to life with a sound and picture quality like you've never experienced before. The Blu-ray Disc is packed with even more DVD extras including additional deleted and extended scenes and a behind-the-scenes featurette - Filming in New Orleans. Breathtaking special effects including an incredible, nail-biting duel time car chase, earth shattering explosions and fantastically realistic stunts makes Déjà Vu an unmissable event on DVD and Blu-ray.

The film stars Washington as top ATF agent Doug Carlin who is brought in by the FBI to investigate a terrorist attack that has killed 500 people in New Orleans. However the FBI has a secret weapon up their sleeve - a mind-blowing space-folding technology machine that enables them to look and travel back in time and potentially trap the terrorists before they commit the crime. Carlin and his associate Andrew Pryzwarra (Val Kilmer) now face a race against time to catch the bombers and save Claire, played by rising Hollywood talent Paula Patton, an innocent victim of the terrorists who Carlin is starting to develop strong feelings for.

Déjà Vu is packed with exciting DVD extras with never-before-scene footage including additional scenes, intriguing featurettes and director commentaries. The Surveillance Window is a completely unique tool that allows you to jump from scene to scene on the DVD - just like in the movie and there's even more new footage to be discovered on the Bu-ray Disc. This exciting new format, not only allows you to view the film with an incredible quality but increased disc capacity allows for even more interactivity and behind-the-scenes secrets with additional bonus materials not found on the DVD.

When ATF agent - Doug Carlin (Denzel Washington) is brought in by the FBI to help investigate a terrorist explosion on a New Orleans ferry, he is given access to the agency's most advanced technology. Using time-folding equipment he is able to travel back up to four days in time with his colleague Andrew Pryzwarra (Val Kilmer) to catch the bombers; realising however that they can in fact stop the explosion ever taking place the duo face a race against time to track the terrorists. Their thrilling race through time takes on a whole new dimension when Carlin falls for Claire Kuchever (Paula Patton) an innocent woman who gets caught up in the horrific crime.