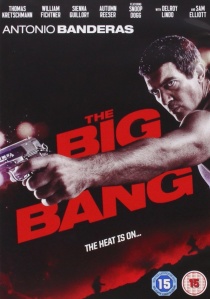 In The Big Bang, released on DVD and Blu-Ray from Anchor Bay Entertainment on 12th March 2012, late one night, Los Angeles private investigator Ned Cruz (Antonio Banderas), gets a visit from a recently paroled Russian boxer Anton 'The Pro' Protopov (Robert Maillet). Anton wants Detective Cruz to find Lexie (Sienna Guillary), his missing girlfriend, and the $30m stash of diamonds she's hiding, and he won't take no for an answer.

Lexie proves to be as elusive as she is beautiful and Cruz becomes obsessed with finding her. With time running out, Cruz discovers the trail leads to reclusive billionaire (Sam Elliot), and his physicist (Jimmi Simpson), intent on recreating The Big Bang underneath the New Mexico desert.

Tailed by a trio of cops also looking to find the missing diamonds, and with the body count piling up, Cruz soon realizes that what appeared to be a standard missing persons case is anything but, and could quite possibly bring about the end of the world as we know it.

Written by Emmy® award-winner Erik Jendresen (Band of Brothers), directed and produced by Tony Krantz (Mulholland Drive, 24) and featuring the debut soundtrack from The Smiths' legend Johnny Marr, The Big Bang is a relentless thrill ride from beginning to end.