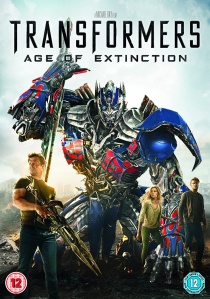 Directed by Michael Bay and produced by Steven Spielberg, the Transformers: Age of Extinction, the fourth instalment of the sci-fi action adventure series based on the 1980s cartoons, is released on 3D Blu-ray, Blu-ray and DVD on 17th November 2014, courtesy of Paramount Home Entertainment.

Four years after the invasion of Chicago, mechanic and single parent Cade Yeager (Mark Wahlberg) discovers what he believes to be a dilapidated truck and takes it home to repair. What he really has resting in his garage is a deactivated Optimus Prime (voiced by Peter Cullen). When government officials learn of the discovery they try to push humanitarian boundaries in the name of scientific development.

The Transformers: Age of Extinction Blu-ray features more than three hours of illuminating bonus content. From selecting fierce new cars and designing new Transformers characters to constructing elaborately detailed sets, this comprehensive footage truly takes viewers inside the fun, hard work and excitement of making an electrifying global blockbuster film. Also included is an in-depth interview with Michael Bay about his approach to the film's jaw-dropping action sequences, a crash course on the "Bayhem" of being on set for the massive, global production, a revealing look at the design process inside Hasbro Headquarters, and more.

DVD
Mired in the tensions between two very different sides of Glasgow, The Nest, released on DVD 18th May 2020 from Acorn Media International, is a thrilling take on the life-changing world of surrogacy ... END_OF_DOCUMENT_TOKEN_TO_BE_REPLACED
Hot PicksView