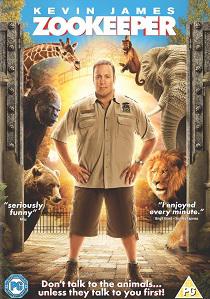 The animals at the Franklin Park Zoo break their time-honored code of silence and reveal that they can talk in the family-friendly comedy Zookeeper, coming to Blu-ray Combo Pack, single disc Blu-ray and DVD on 21st November 2011 from Sony Pictures Home Entertainment.

The bonus features on the DVD include deleted scenes, a blooper reel and multiple behind-the-scenes featurettes, including Creating the Visual Effects, which shows how filmmakers created talking animals. The Blu-ray Disc contains everything included on the DVD, plus additional featurettes, including The Cast of Zookeeper, a look at some of the star voices in the film, including Judd Apatow, Jim Breuer, Jon Favreau, Faison Love and Maya Rudolph, as well as movieIQ+sync. The Blu-ray Combo Pack includes all the added value from the single DVD and Blu-ray versions.

In Zookeeper, the animals at the Franklin Park Zoo love their kindhearted caretaker, Griffin Keyes (Kevin James). Finding himself more comfortable with a lion than a lady, Griffin decides the only way to get a girl in his life is to leave the zoo and find a more glamorous job. The animals, in a panic, decide to break their time-honored code of silence and reveal their biggest secret: they can talk! To keep Griffin from leaving, they decide to teach him the rules of courtship - animal style.