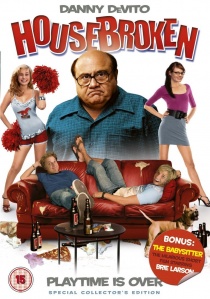 The directorial debut of hit screenwriter Sam Harper (Just Married; Cheaper By The Dozen 1 and 2; Rookie Of The Year), Housebroken stars veteran comic actors Danny DeVito (Solitary Man; It's Always Sunny In Philadelphia), Katey Sagal (Sons Of Anarchy; 8 Simple Rules) and Tom Wilson (Biff Tannen from the Back To The Future movies) alongside up-and-coming young stars Brie Larson (Scott Pilgrim Vs. The World; United States Of Tara; Hoot), Ryan Hansen (Veronica Mars; Friday The 13th), Skyler Stone (Stuck On You; The Rules Of Attraction) and Kiernan Shipka (Mad Men) in a raunchy comedy that recalls the works of Judd Apatow and The Farrelly Brothers

Recently retired firefighter Cathkart (DeVito) is looking forward to enjoying his golden years relaxing at home with his wife (Sagal). But getting in the way of his plans are his two jobless, twenty-something slacker sons, Elliot (Hansen) and Quinn (Stone), both of whom are extremely reluctant to leave the luxury and security of the family home. Determined to teach the pair a lesson in self-sufficiency in the hope that they will eventually set out on their own, Cathkart embarks on a surprise vacation leaving his clueless sons home alone with an empty fridge, empty wallets and no electricity.

Housebroken will be released on DVD by Showbox Home Entertainment on 7th June 2010.

DVD
Sam Mendes, the Oscar®-winning director of Skyfall, Spectre and American Beauty, brings his singular vision to his World War I epic, 1917 to DVD, Blu-ray and 4K Blu-ray 18th May 2020 from ... END_OF_DOCUMENT_TOKEN_TO_BE_REPLACED
Hot PicksView