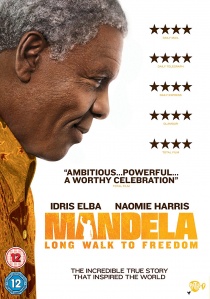 Nominated for Best British Film at the 2014 BAFTA® Awards, celebrate the man who rose to the challenge of his time and triumphed, with Mandela: Long Walk to Freedom, released on Blu-ray, DVD on 28th April 2014, courtesy of Twentieth Century Fox Home Entertainment.

Released to mark the 20th anniversary of South Africa's Freedom Day, the day on which the country's first post-apartheid elections were held, Mandela: Long Walk to Freedom is a thrilling, heart-rending portrayal of the father of a nation.

Inspired by the autobiography of the same name, Mandela: Long Walk to Freedom stars Idris Elba (Luther, The Wire) in the title role and Naomie Harris (Skyfall) as Winnie Mandela, and was directed by Justin Chadwick (The Other Boleyn Girl).

The film tells the story of a seemingly ordinary young Nelson Mandela, who grew up in the rural village of Qunu and was initiated in the way of his Xhosa tribe before moving on to study law and practice his trade in the country's capital of Johannesburg.

The political fervor that Mandela was famous for came later, and was driven by the atrocities of the apartheid regime of the time - notably the infamous Sharpeville township massacre of 1960. After leading the military arm of the ANC in a series of violent attacks Mandela was arrested for sabotage, convicted of treason and incarcerated for 27 years before international outrage lead to his release in 1990.

The legacy of South Africa's first African president, known affectionately by his clan name; Madiba, lives on in the hearts and minds of individuals across the world following his death in December 2013. Own a piece of his incredible story, with Mandela: Long Walk to Freedom on Blu-ray and DVD this spring.