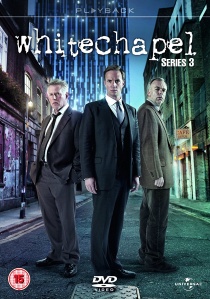 Join DI Joseph Chandler and his crime-fighting unit as they protect the streets of London's Whitechapel, an area drenched in dark history and sinister goings-on, as Whitechapel: Series 3 is released on DVD with never-before-seen bonus features from 12th March 2012, courtesy of Universal Playback.

Convinced that crimes of the past hold the vital key to solving dreadful crimes of the present, Chandler digs deep into the police archive - a vast but chaotic collection of files and papers beneath the incident room - to help the officers put brutal killers behind bars. Taking the audience through 300 years of thrilling history, Whitechapel Series 3 explores the East End, where fear is rife in the Huguenot weaving houses of Wilkes Street and the dark corners and rooftops around Brick Lane.

Whitechapel Series 3 boasts two exclusive and unmissable bonus features to draw you deeper into the shocking mysteries. The Psychology of Fear takes a fascinating look at horrific crimes of the past and includes never-before-seen interviews with the cast and crew. Whitechapel - The Past Uncovered sees Ed Buchan (Steve Pemberton) discussing the frightening real life cases in question this series, plus takes a revealing look at filming in the historically fateful area.