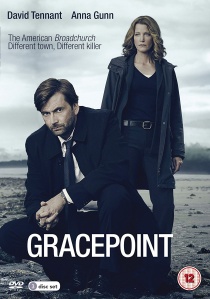 Adapted and created by Chris Chibnall (Broadchurch, The Great Train Robbery), the slow-burning whodunit expands on the critically acclaimed ITV drama, threading new storylines through the fantastically gripping narrative. The 10-part series comes to DVD as a stunning three-disc set on 8th June 2015, following its run on ITV Encore.

When Danny, a young boy, is found dead on the idyllic beach of a small California seaside town it throws the community into turmoil. Detective Emmet Carver (Tennant - Broadchurch, Doctor Who) is brought in to head up the homicide case, ruining Detective Ellie Miller's (Anna Gunn - Breaking Bad, Enemy of State) chance of promotion.

As Danny's parents Mark and Beth Solano begin to grieve for their son, the whole community is under suspicion; from the father to the local priest, friends and acquaintances. Now the two detectives must learn to work together, drawing on their strengths against the odds and within a town that wants to keep its secrets to itself.

A powerhouse supporting cast including Nick Nolte (Cape Fear), Michael Peña (End of Watch), Virginia Kull (Boardwalk Empire) and Kevin Rankin (Breaking Bad) contributes to a drama that draws on and echoes the TV phenomenon Broadchurch, but the path of which leads to an altogether different and devastating conclusion.

UHD
You ever hear the one about the cop, the blonde, the psycho and the mafia princess? Birds Of Prey And the Fantabulous Emancipation of One Harley Quinn, coming to DVD, Blu-ray and 4K UHD 20th June 2020 ... END_OF_DOCUMENT_TOKEN_TO_BE_REPLACED
Hot PicksView