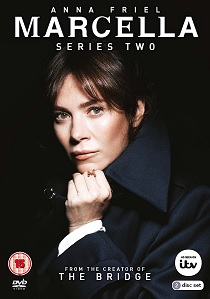 Described as 'One of the most watchable actresses on telly' (Sunday Mirror), International Emmy award-winning star Anna Friel returns to our screens as the troubled detective for a second-series of Marcella. This darker than dark, Scandi-Noir style drama arrives on DVD following its run on ITV, alongside Marcella Series One and Two Box Set courtesy of Acorn Media International on 16th April 2018.

Following the critically acclaimed first series we join Marcella as she investigates a new case ... one that is disturbingly close to home. When a body is discovered inside a wall, the devastated police officer soon works out that it's schoolboy and friend of her son, Leo Priestley, who was abducted a few years beforehand.

Alongside her team, the unflinching and unrelenting detective is willing to push boundaries in her dogged pursuit of the child killer, whatever the emotional and relational collateral damage may be. Driven by justice, Marcella has an innate recklessness and will do whatever it takes in its pursuit, even if it means damaging herself and those around her.