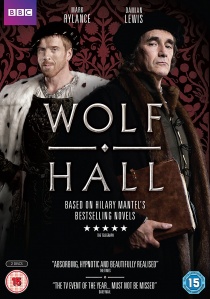 Wolf Hall sees two-time Olivier and three-time Tony Award winner Mark Rylance as the masterful manipulator Thomas Cromwell. The story follows the complex machinations and back room dealings of this pragmatic and accomplished power broker - from humble beginnings and an enigmatic past - who must serve king and country while navigating deadly political intrigue, the King's tempestuous relationship with Anne Boleyn and the religious upheavals of the Protestant reformation.

"[Cromwell] had tremendous abilities, both mental and physical. He's a very good judge of people, personal tragedy in his own life had given him a useful sense of almost nihilism - he knew you could lose everything in a moment - and most of all he was lucky, in that he knew about trade and banking at exactly the time the aristocracy had begun to need those skills. Being apprenticed to Wolsey was also a stroke of luck. Physically he was a soldier, so no one frightened him", says Mark Rylance.

Emmy-winner Damian Lewis (Homeland) is Henry VIII and Claire Foy (The Promise) stars as the calculating and ambitious Anne Boleyn, the women for which Henry cast as a Queen, broke with the Catholic Church and drove his country to the brink of civil war - and who later climbed the scaffold to meet her death at that same King's command:

"Firstly he desired her intensely yet she was very good at holding back, not giving him what he wanted - which of course only made him want her more. She was also fiercely intelligent and strong-willed. Henry was infatuated with her - he had never met a woman like this. In the end it might even have been Anne's simple strength of character, strength of personality, her will, her eloquence, her intelligence and probably in the end her inability just to shut up that did for her. I think Henry just tired of her", says Damian Lewis.

Featuring over 30 minutes of exclusive extras, previously unseen content on both home entertainment releases include interviews on set with Mark Rylance, Damien Lewis and Claire Foy, as well as with Jonathan Pryce who plays Cardinal Wolsey (Tomorrow Never Dies), Mark Gatiss (Sherlock) who features as Stephen Gardiner and the drama's Bafta-winning director Peter Kosminsky (The Government Inspector, The Promise).

BD
The surviving members of the resistance face the First Order once again, and the legendary conflict between the Jedi and the Sith reaches its peak as Star Wars: The Rise of Skywalker is released on ... END_OF_DOCUMENT_TOKEN_TO_BE_REPLACED
Hot PicksView